ThrowBackThursday - Looking back on a blog post of recent yesteryear (and bringing it over from the old website for further reference). Sadly, i have learned that Larry McCarthy has since passed:
Finally got the time to edit & post this story from 2009 below:

Talk about timing! We had a show scheduled in Hackensack, NJ on a Tuesday in July 2009, but the weather decided not to cooperate whatsoever. So, being that the New Jersey-ites are the great forecasters of impending outdoor event-failure-due-to-rain, the concert was postponed until the following month. This was somewhat great news in disguise for some of us boys in the band (Hotel California-A Salute To The Eagles), being that our base of operations for the week was in the Meadowlands, NJ area, and only a short New Jersey Transit/under-the-Lincoln-Tunnel ride away from the Big Apple. A day off so close to NYC? Are you kidding? So what if It's raining! Fugettabouddit! So, off three of us went into Town. That's, "town" with a capital "T".

After a full afternoon of exploring, my walking compadre, Scotty "V" (see photo), and I had a little time to kill before we caught a cab from the Broadway district of New York City to meet up with our cohorts for dinner down in Little Italy. We decided to find a place to plant it for a beer, and since we were by the Gershwin Theatre, home of the Broadway favorite "Wicked

" (which I love and did end up seeing a number of weeks later - but that's another blog), I made the call of portage and we temporarily anchored ourselves just east of there on 50th Ave. at Emmet O'Lunney's (yes, an Irish bar/grill), and got off of our tired feet for a few (that's minute's, not beers!) and a brew. 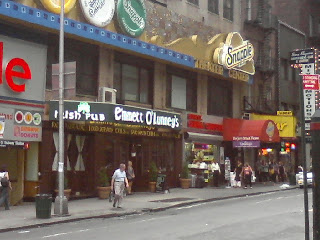 Very shortly after, a guy in a plaid shirt and baseball cap carrying a box of books proceeds to walk in with his devoted woman by his side. He sits next to us at the bar, and starts enthusiastically talking to the barmaid (whom actually DOES have an Irish accent, by the way-gotta love this town!) and hands her a book from his cardboard "carrying case". This was obviously a place he'd been before and at this moment he was obviously very proud. "Wow, we were sitting next to a famous author in the heart of New York City!" thought us "wayward traveling musician/tourists only in need of a place to get off our feet."

Striking up a real, neighborly NYC conversation in a real NYC kinda good-natured way, we learned that a very good friend of his, Lawrence McDonald was actually the author of the book and, smiling, he removes one of is treasures from his box of A Colossal Failure Of Common Sense - The Inside Story of the Collapse of Lehman Brothers, opens to a page, and has us read one of his adventures in the book with one sentence catching my attention which read, "...later in fall 2005 we decided to go up to the Mohegan Sun casino in Connecticut for a couple of days." (You'll have to get the book and read the rest for yourself. This is a long blog already)
Okay, so we learn we are sitting next to and conversing with a major player in the book, Larry McCarthy, which we later ascertained after taking in the story in full, that we were actually in the presence of a Wall Street celebrity! But wait, need I say...."there's more!" ?

What immediately caught my attention right at the start (and I told Larry so) was the particular location of the narrative he was now having us read. My eyes flew open (cliche', but true), because coincidentally we had just performed at that same Mohegan Sun Casino of Larry's described adventures only 2 DAYS BEFORE! Holy Serendipity, Batman!

After further conversation, and one including talk of a possible performance opportunity in the future for Hotel California at one of the parties he hosts, he signs a copy for us, and give's it to us along with his card.

His brief visit coincided with our need to hit the streets once again and wave ourselves down a cab for our rendezvous with all good and tasty things Italian-NYC style, so we all sauntered out together on that late Tuesday afternoon, eastward along the sidewalk of 50th Ave., with Larry eventually pointing out what once use to be the actual Lehman Bros. Building where he worked. (Making millions at a time makes "worked" seem like an understatement!) I took this photo on a street corner and we parted ways. 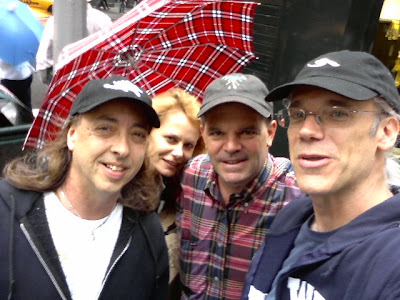 Scott and I talked about this chance encounter for weeks (and still do), reading the book and making comments about it as we went on down the road to wondrous adventures. What will top this?

Just a highlight of that trip for me, and I'm sure for Scott as well. Yes, we met a financial celebrity indeed, but more notable than that, is the privilege, Lord willing, of just living life in all it's unexpectedness and to experience some warm generosity from a local (well, sort of - he told us he commutes from Florida) boy who didn't know us from Adam! That's the stuff that life is made of. I love New York!

Mini-book review: I find I'm fascinated with the world of finance. Maybe it's because I try to stay so in-step with my right-brain awareness of the world, always on the hunt, my "songwriter radar" being tuned into sights, sounds, words, conversations, emotions, etc. It was a fun, imaginative escape to envision myself a part of the fast-paced, high-pressure atmosphere of Wall Street. And this book really gives you an excellent feel for that (not to mention the incredible inside-story of the Lehman Brothers debacle).

And by the way, you can find the Lawrence McDonald