Book Quotes - Custom of the Country

I am so glad to finish my iPad book "Custom of the Country" by Edith Wharton (not that I didn't enjoy it) so I can actually hold my next read, a real live book - binding, pages turning in anticipation of the next - with my own two hands!

“It's dirty and ugly—all the towns we've been to are disgustingly dirty. I loathe the smells and the beggars. I'm sick and tired of the stuffy rooms in the hotels. I thought it would all be so splendid—but New York's ever so much nicer!"

"I don't care—there are the roof-gardens, anyway; and there are always people round. All these places seem as if they were dead. It's all like some awful cemetery.”
~~~~~~~~~~~~~~~

“She was aware of the fading of the summer light outside, of the movements of her maid, who was laying out her dinner-dress in the room beyond, and of the fact that the tea-roses on her writing-table, shaken by Van Degen's tread, were dropping their petals over Ralph's letter, and down on the crumpled telegram which she could see through the trellised sides of the scrap-basket.”
~~~~~~~~~~~~~~~

“The smothered springs of life were bubbling up in Ralph, and there were days when he was glad to wake and see the sun in his window, and when he began to plan his book, and to fancy that the planning really interested him. He could even maintain the delusion for several days—for intervals each time appreciably longer—before it shrivelled up again in a scorching blast of disenchantment. The worst of it was that he could never tell when these hot gusts of anguish would overtake him. They came sometimes just when he felt most secure, when he was saying to himself: "After all, things are really worth while—”
~~~~~~~~~~~~~~~

WRITING (Written about me? L.O.L.)

“...after nights of brooding he made a dash at it, and wrote an opening chapter that struck him as not too bad. In the exhilaration of this first attempt he spent some pleasant evenings revising and polishing his work; and gradually a feeling of authority and importance developed in him. In the morning, when he woke, instead of his habitual sense of lassitude, he felt an eagerness to be up and doing, and a conviction that his individual task was a necessary part of the world's machinery. He kept his secret with the beginner's deadly fear of losing his hold on his half-real creations if he let in any outer light on them; but he went about with a more assured step, shrank less from meeting his friends, and even began to dine out again, and to laugh at some of the jokes he heard.”

Excerpts From: Wharton, Edith. “The Custom of the Country.” iBooks.
This material may be protected by copyright.

A paragraph about my favorite park in NYC:
“The sense of weariness returned with accumulated force, and for a moment she felt that she could walk no farther. She had reached the corner of Forty-first Street and Fifth Avenue, and she remembered that in Bryant Park there were seats where she might rest.
That melancholy pleasure-ground was almost deserted when she entered it, and she sank down on an empty bench in the glare of an electric street-lamp”
–--------------------- 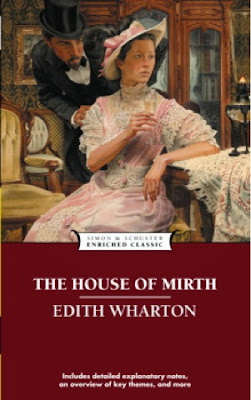 “Lily, lingering for a moment on the corner, looked out on the afternoon spectacle of Fifth Avenue. It was a day in late April, and the sweetness of spring was in the air. It mitigated the ugliness of the long crowded thoroughfare, blurred the gaunt roof-lines, threw a mauve veil over the discouraging perspective of the side streets, and gave a touch of poetry to the delicate haze of green that marked the entrance to the Park.”
----------------------
“She spoke with the noble directness which she could command on such occasions, and which was like a large steady light thrown across the tortuous darkness of the situation. In its inconvenient brightness Rosedale seemed to waver a moment, as though conscious that every avenue of escape was unpleasantly illuminated.”
Excerpt From: Wharton, Edith. “House of Mirth.” iBooks.
This material may be protected by copyright.
Check out this book on the iBooks Store: https://itunes.apple.com/us/book/house-of-mirth/id498716749?mt=11

“The immense accretion of flesh which had descended on her in middle life like a flood of lava on a doomed city had changed her from a plump active little woman with a neatly-turned foot and ankle into something as vast and august as a natural phenomenon.” 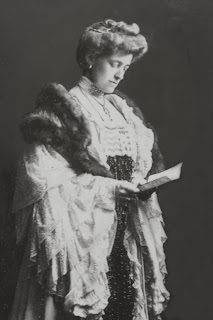 Excerpt From: Wharton, Edith. “The Age of Innocence.” iBooks.
This material may be protected by copyright.