Looking back on a blog post of recent yesteryear (and bringing it over from the old website for further reference): 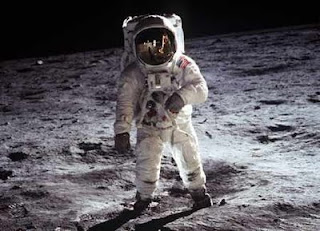 I brought the autobiography "Magnificent Desolation: The Long Journey From The Moon" with me on the latest trek in July with the HC (Hotel California) and, unbeknownst to me until after I finished it, July 17th, 2009 happened to be the 40th anniversary of Apollo 11 and the first man on the moon!  This memoir is from the guy who was actually the "2nd" man on the moon, Neil Armstrong's "sidekick", Buzz Aldrin (written along with Ken Abraham). You creative types out there might like this quote from the book:
"Exploring this place that had never been seen by human eyes, upon which no foot has stepped, or hand touched-was awe-inspiring.  But we had no time for philisophical musings.  Our time on the surface had been designed by Mission Control to be extremely limited-a mere two and a half hours outside the LM [Lunar Module]...We weren't trained to smell the roses or to utter life-changing aphorisms...That's why for years I have wanted NASA to fly a poet, a singer, or a journalist into space - someone who could capture the emotions of the experience and share them with the world."