Well, yes, way. A July 4th to remember for sure!

Here I am singing "Desperado" in front of a live orchestra. OMGee! Thanks to Ken Yoshida for this photo. 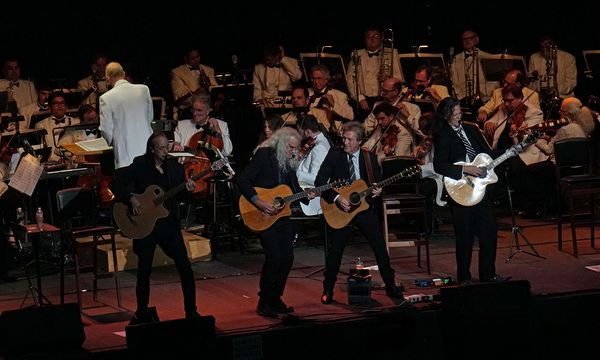 Here are some photos I took: 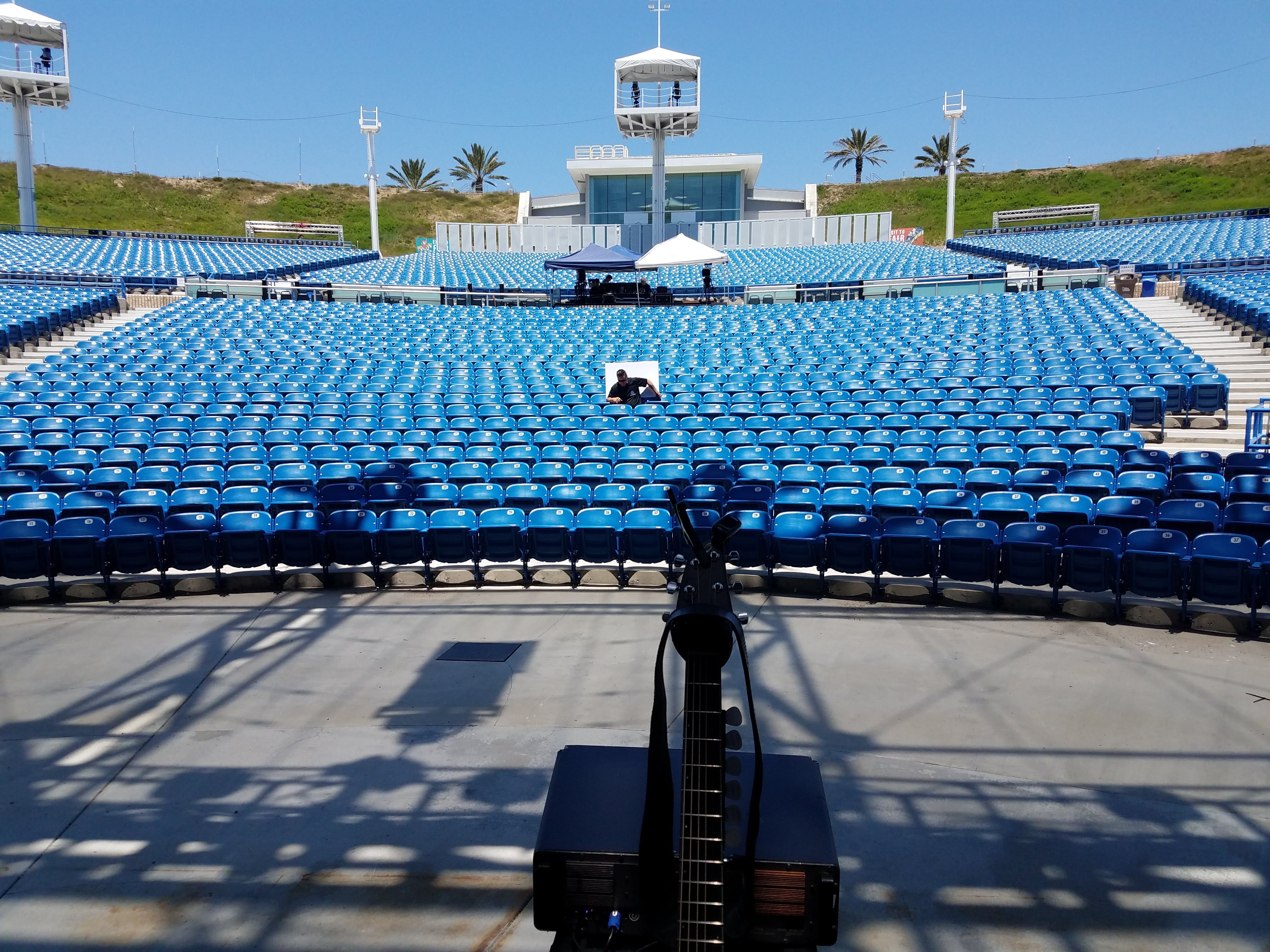 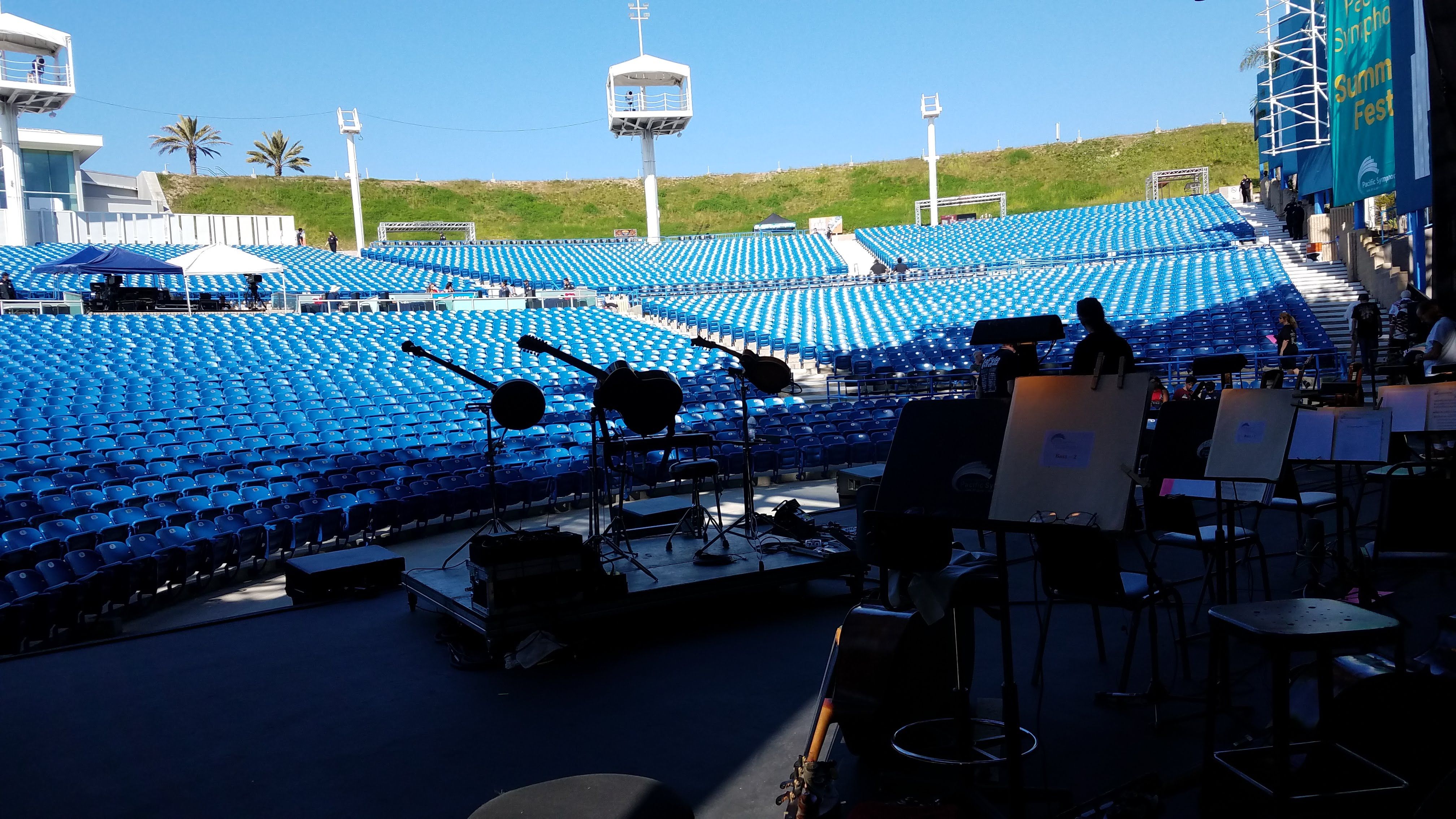 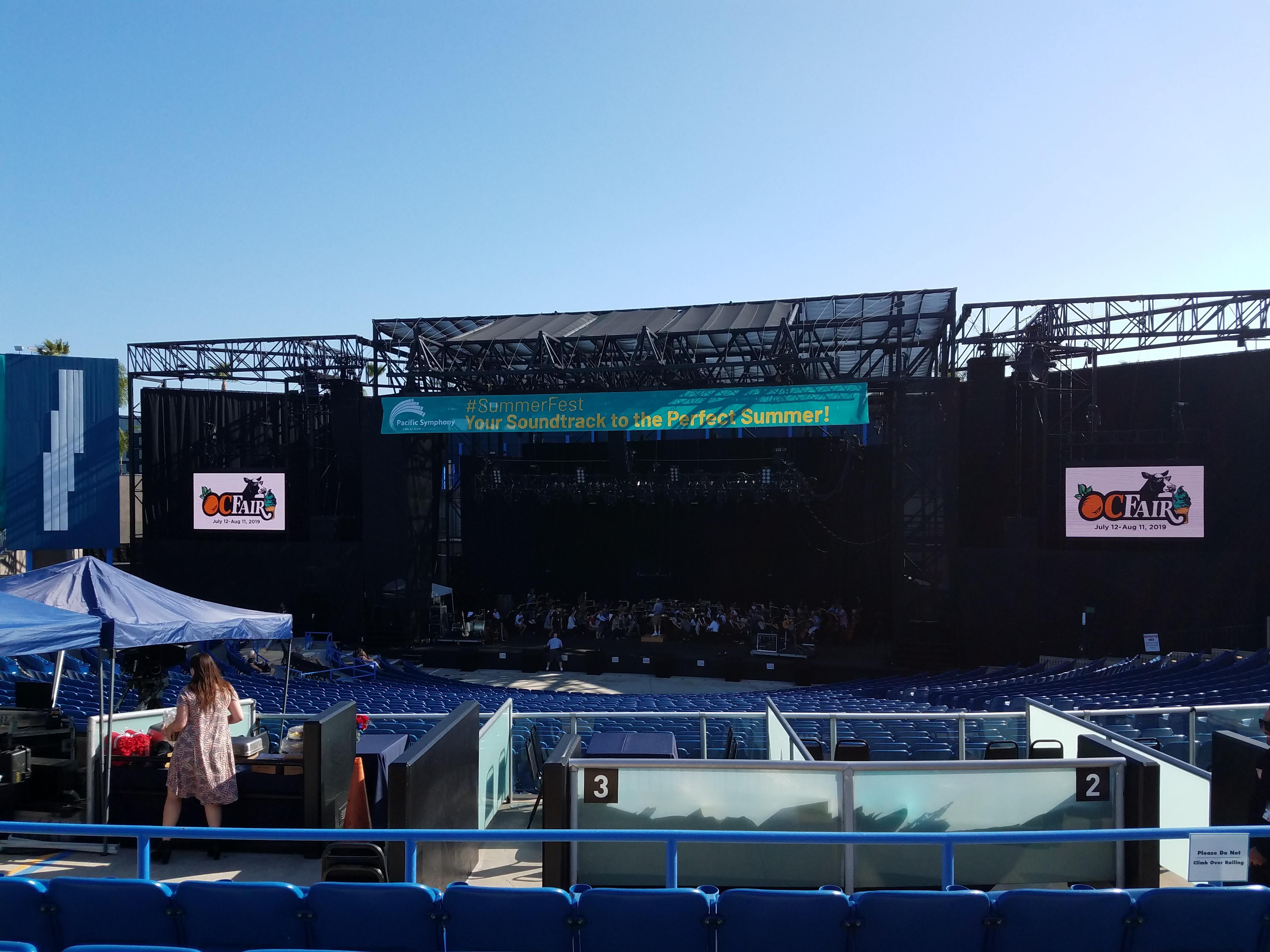 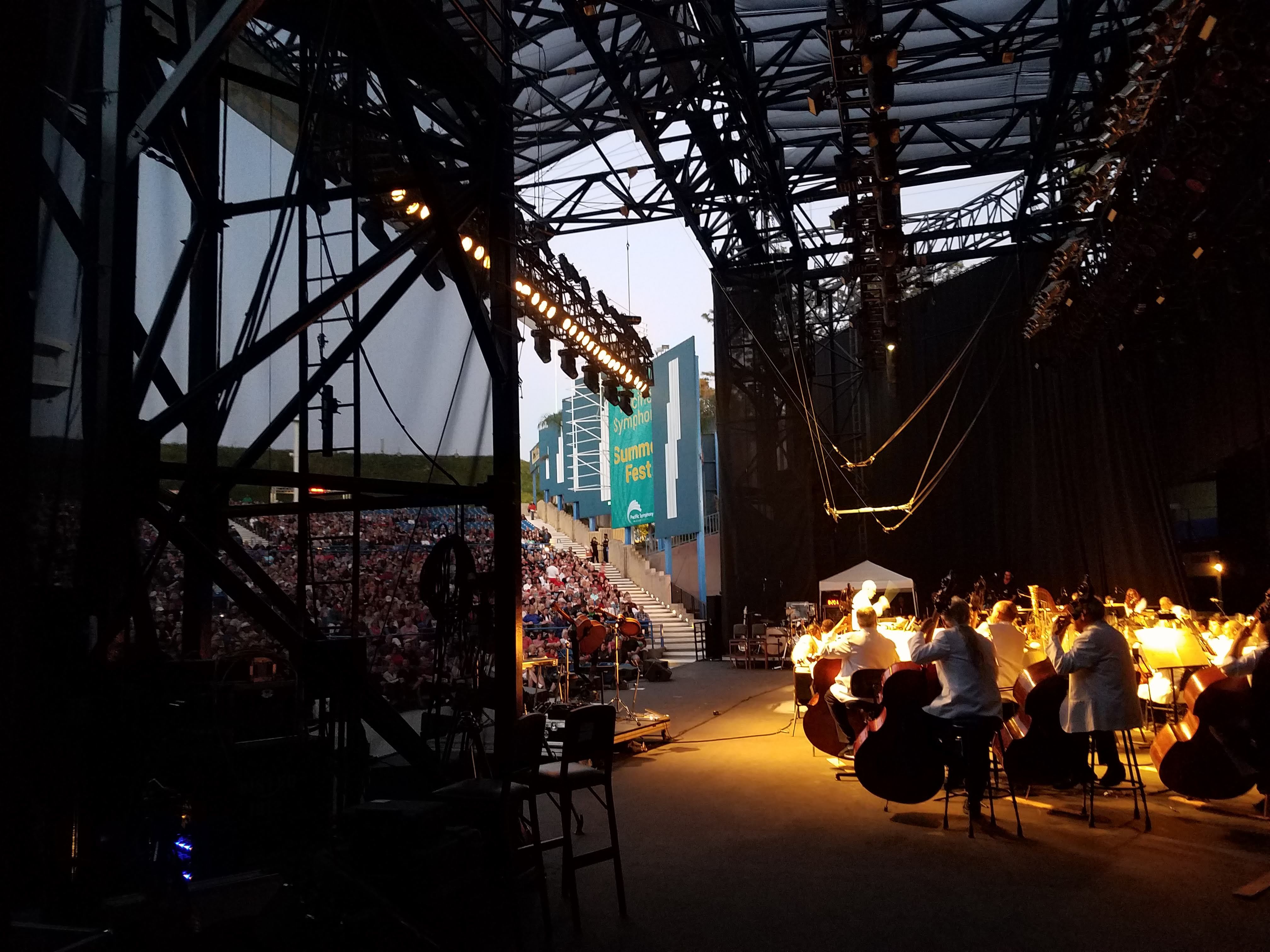 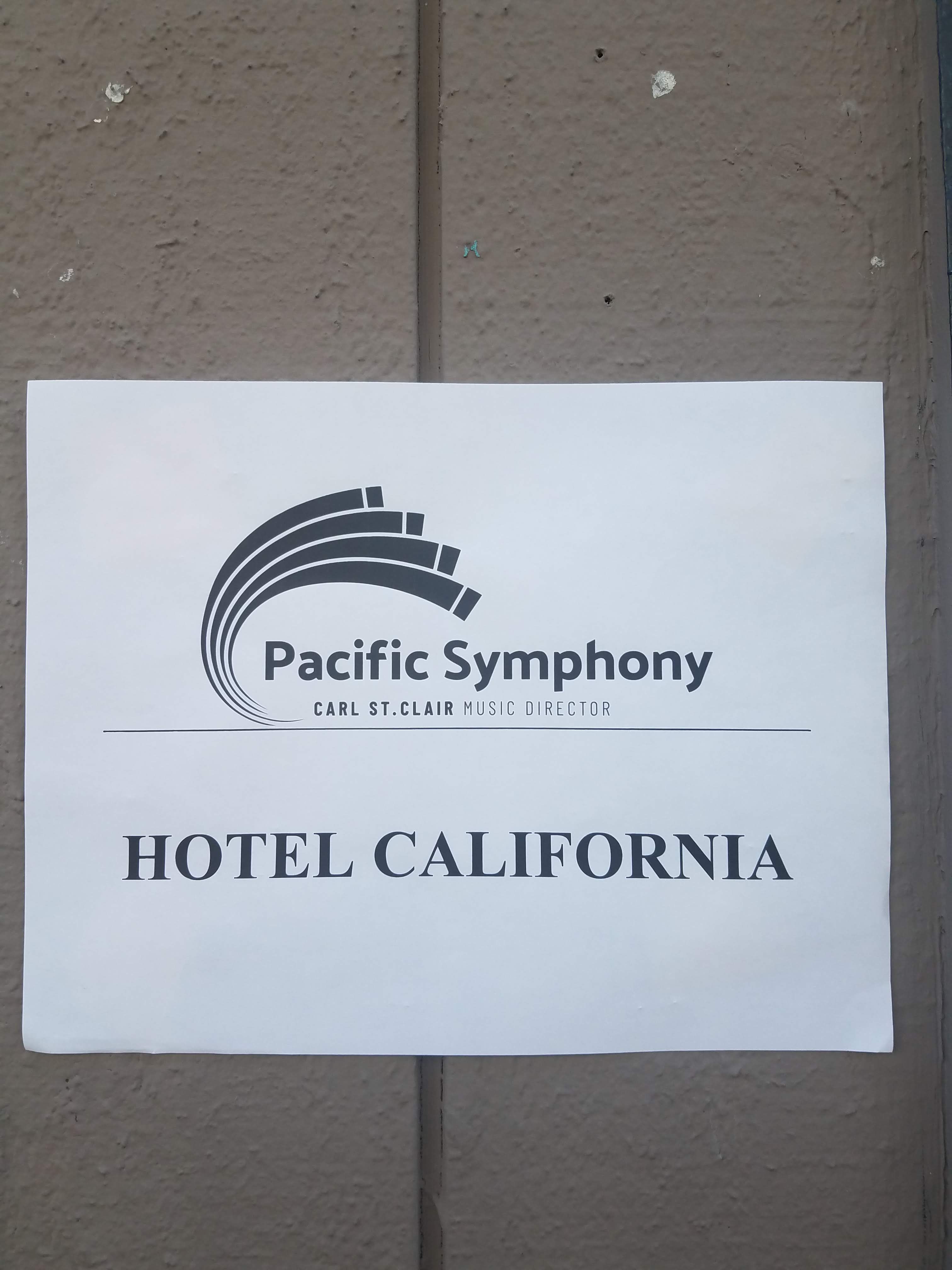 Back Home Again in Downey, California

Well, the Downey Theatre show was quite fun and rewarding. I saw most of early years in Downey flashing before my eyes after the show!

Of course, members of my family were there that could make it. But then there's fellow past students and friends from Tot-Time (Pre-Kindergarten!), Kindergarten, and from all the years of Elementary, Middle, and High school!

BELOW: From the small stage on the left in the 70's, to the big stage in middle in the present! 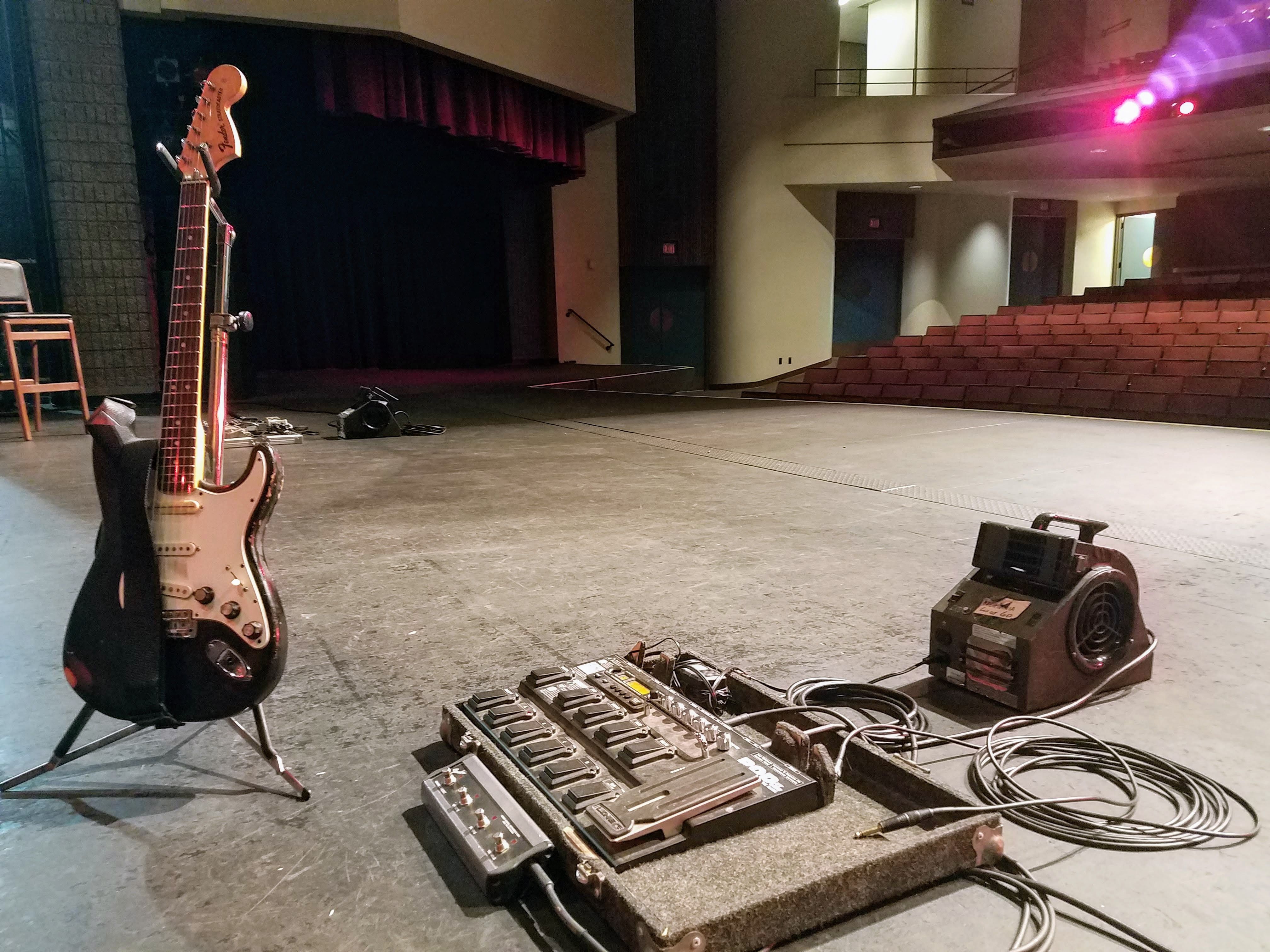 BELOW: And with a different band, I've played on stage-right stage as well in my younger years!

BELOW: It has been brought to my attention, the middle stage hosted the Warren High Jazz Ensemble way-back-when, which I was a part of on guitar! 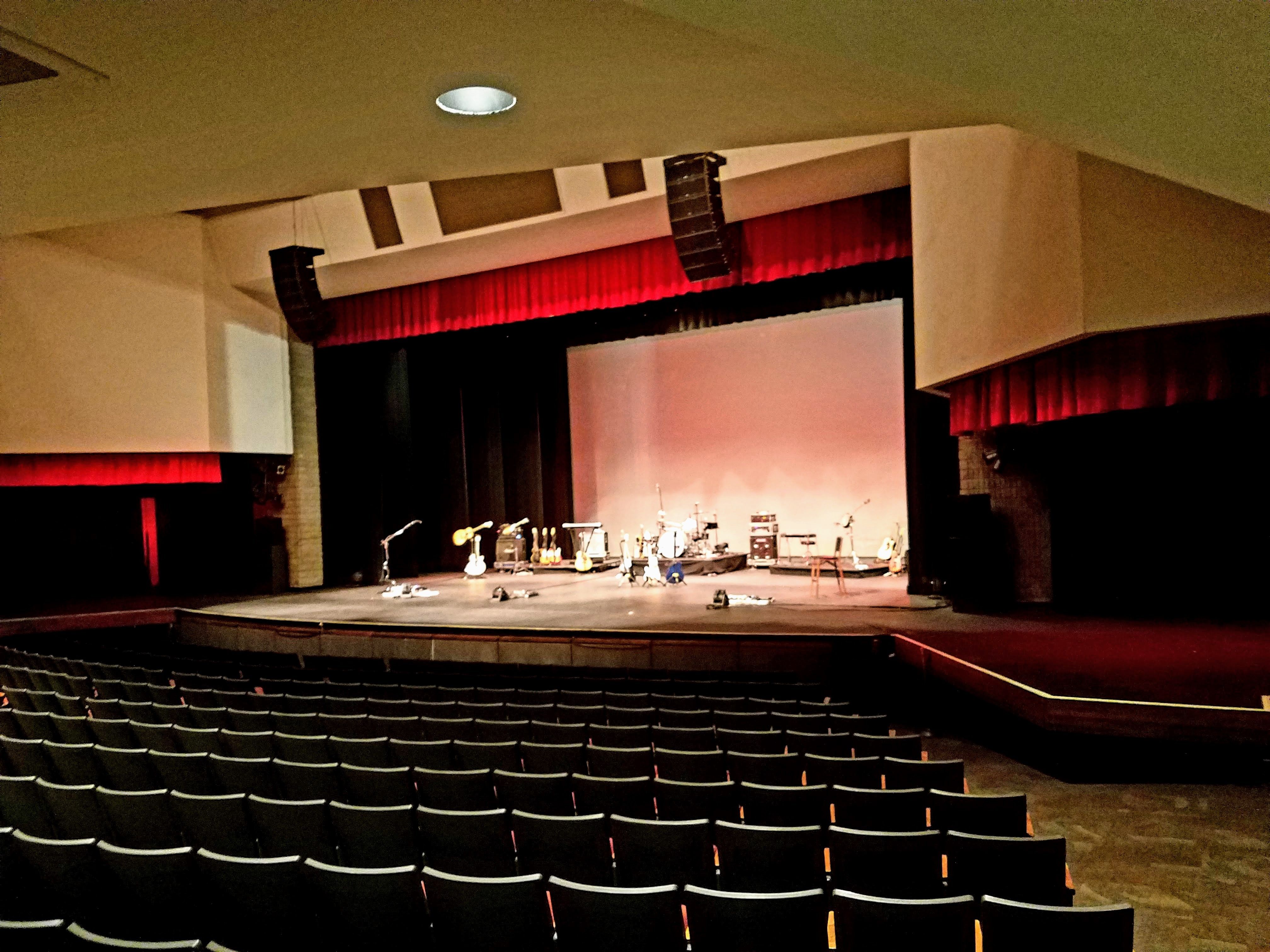 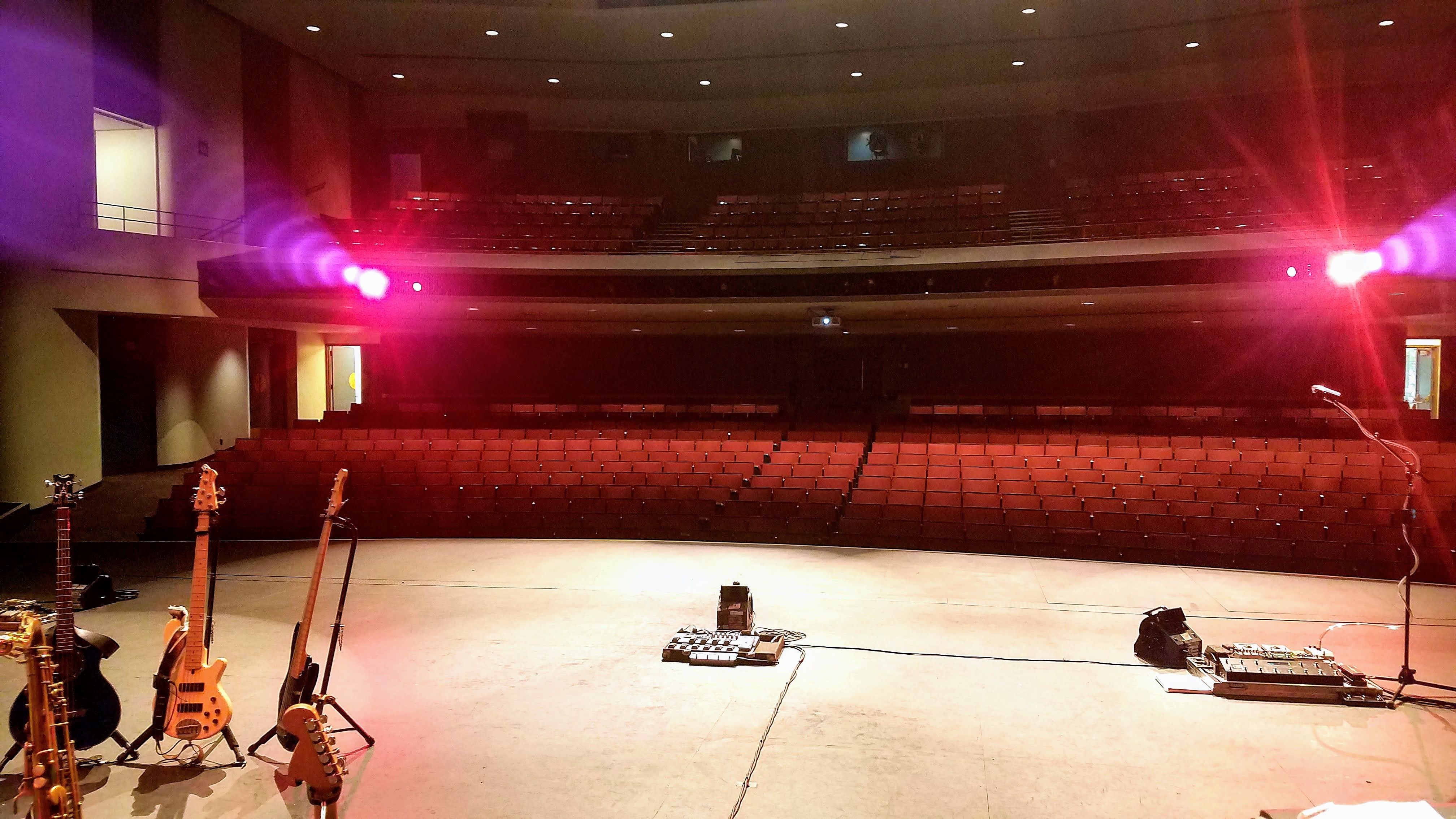 BELOW: Looking out from the backstage, over on the right, the Downey City Library. I was just a little Stevie when I went here. I believe there is now a small display of "The Carpenters" memorabilia. They were from my town and lived here unbeknownst to me at first while I was working on my guitar skills in my bedroom on the other town side of town. 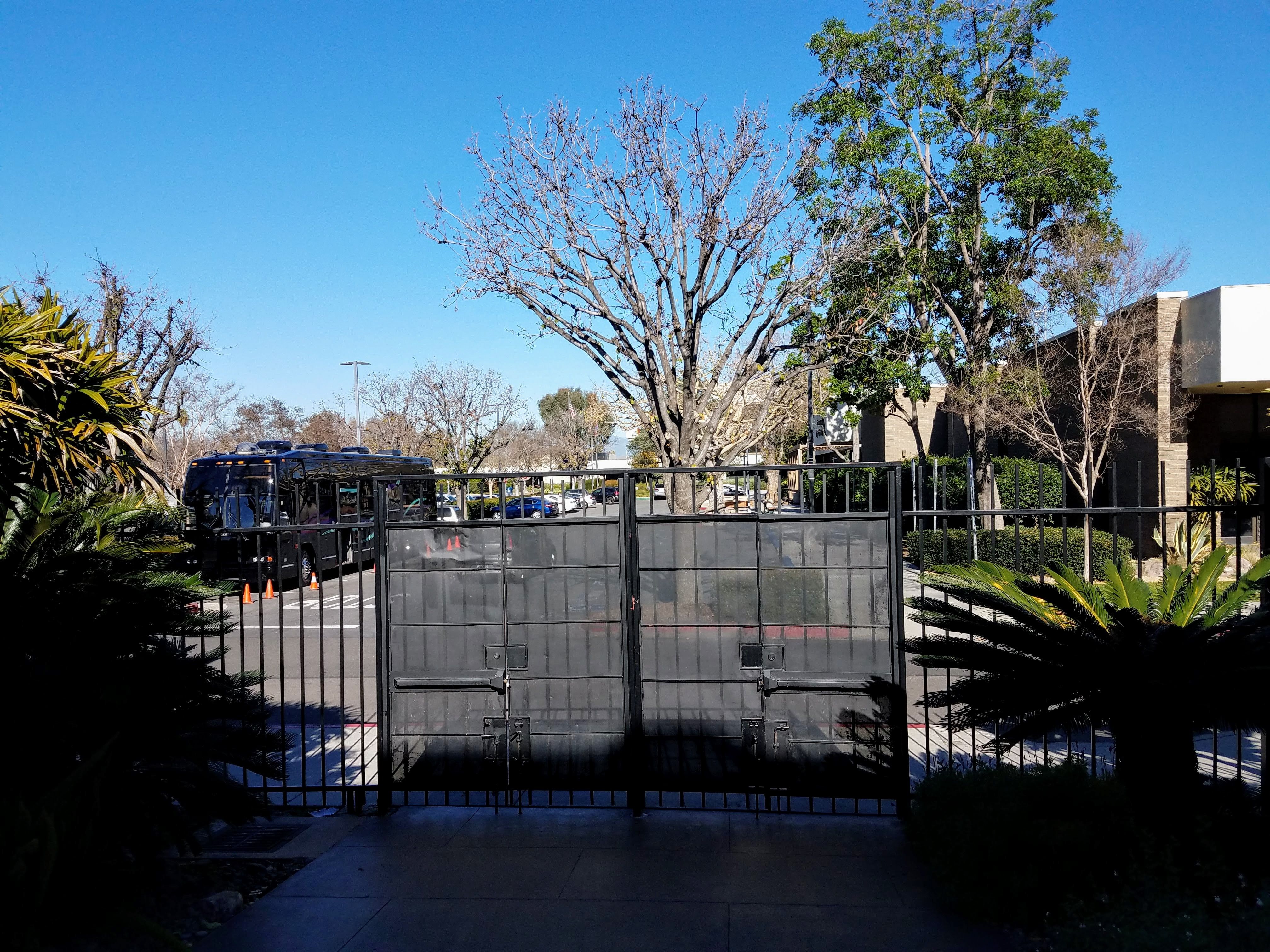 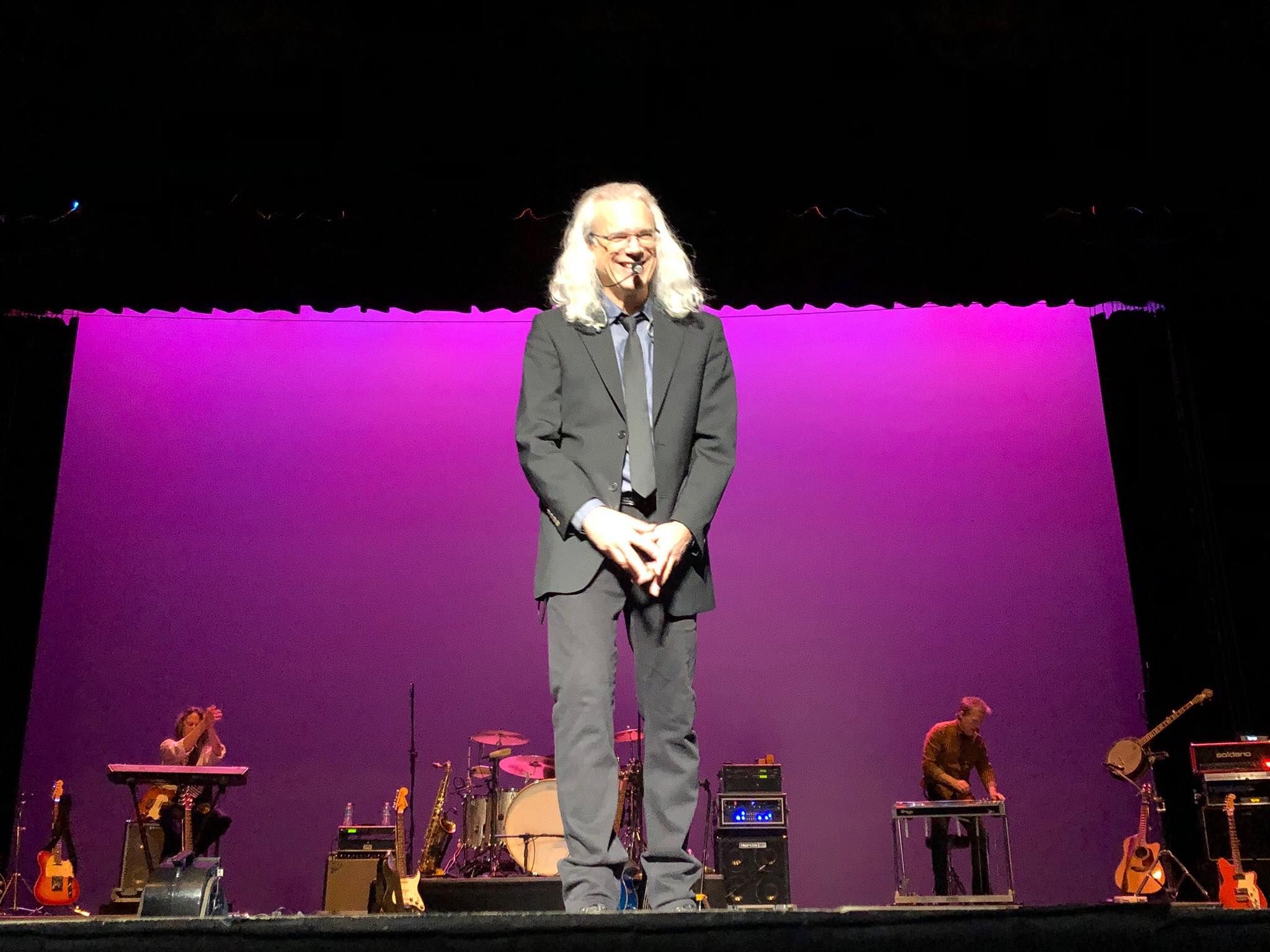 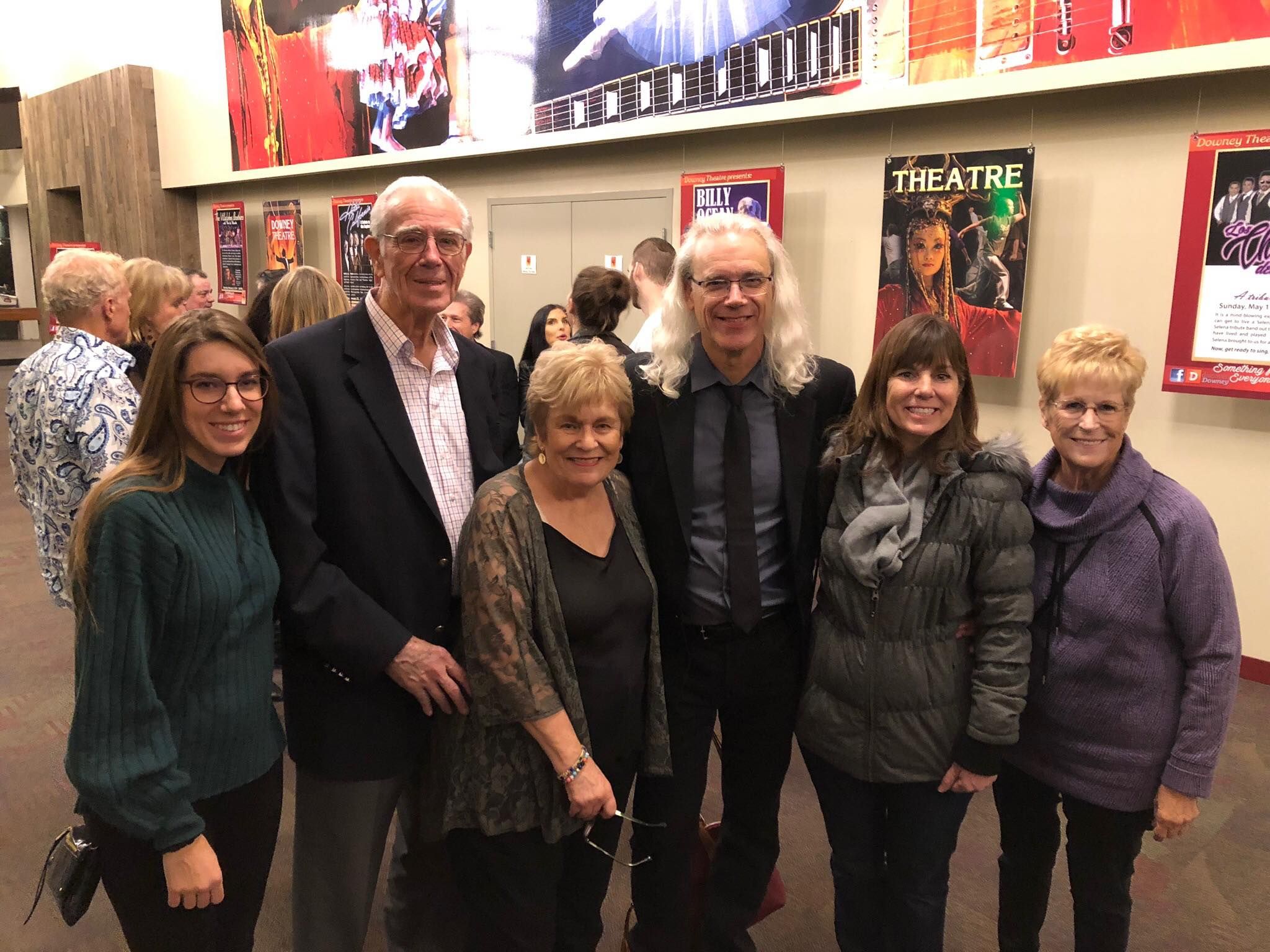 And then there's the NEWSPAPER ARTICLE! Check it out HERE

Hotel California - A Salute to the Eagles is set to play in my hometown, Downey, CA on January 25, 2019 at the Downey Theatre! The last time I played there it was for the "Way Outer Broadway" Talent Contest.... in the 70's! And I have the photos to prove it! (Different hair color - same guitar) 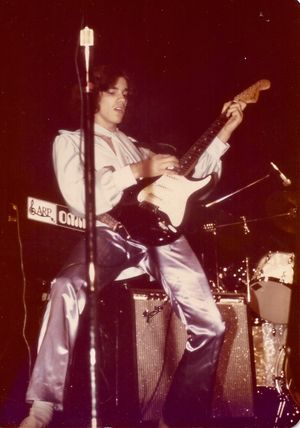 My musical journey brings me back around, full circle. 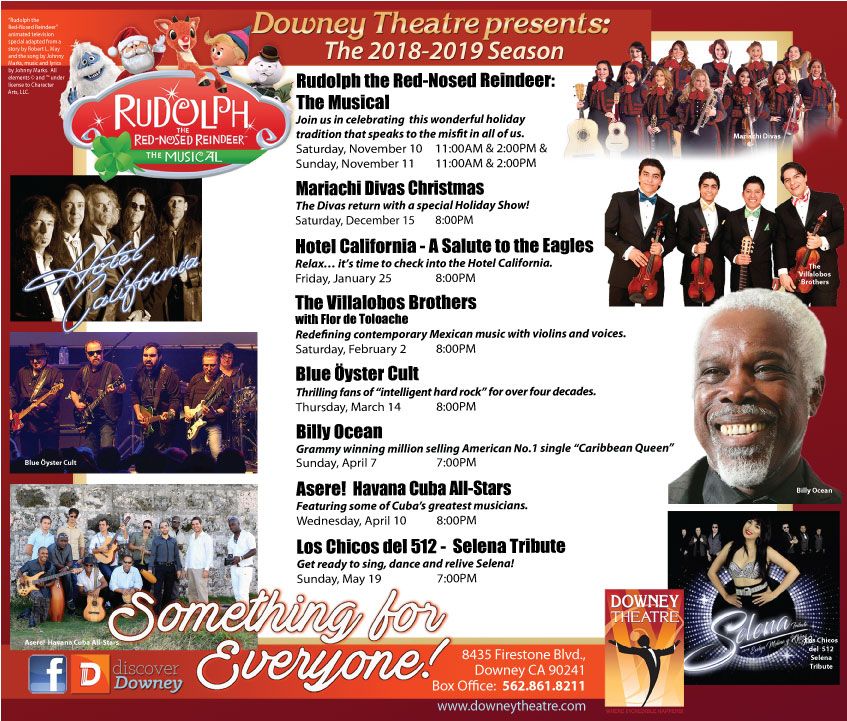 ThrowBackThursday - What A Night For "Promises, Promises"! 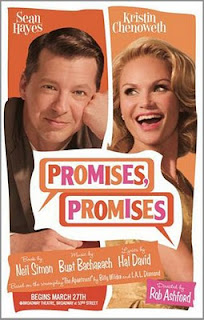 On a whim, I "splurged" and procured for myself a seat to see, Krisitin Chenoweth in "Promise, Promises" at the Broadway Theatre this past week.
I am both a fan of Kristin's (since discovering her from "Wicked

") AND the tunes of Burt Bacharach/Hal David

.  To hear them both at the same time was indeed a treat for me!
Of course, a trip to the stage door after the show was in order!  Something that is so easy to do on Broadway since the venues' stage doors spill right out onto the street.  Now, here's a tip (and reminder for me next time) if you want to do the same for an autograph:
Get by the back-stage door earlier right after the show and get right up against the barricade.  I was approximately 2 & 1/2 people behind (not far at all actually).  I was close enough to see Kristin's gracious, smiling face and her perfectly crafted eyebrows, but not close enough for her to reach my Playbill for a quick black-sharpie squiggle of acknowledgement and thanks.
Now I could have been rude and lowered it into the faces of fans in front of me, but that didn't seem right.  And Kristin is quite tiny and I supposed reaching up would have been a little difficult and, quite possibly, a little unsafe for her.  So a gaze upon her presence amidst the hoopla that goes with it will have to suffice.
She signed just enough momentos before being whisked away in a black Audi sedan which sequence of events went like this:
1. All the actors, ensemble, main characters (Sean Hayes being one of them - but hey, I'm a guy, and Kristien's better lookin') exit the theatre.
SIDE NOTE: It's interesting, maybe a little sad, that the amazingly talented ensemble players just kind of saunter out one-by-one in their sweats or whatever street clothes and everyone pretty much just watches them walk out into the late-night NYC city streets.
2. Tall serious-looking guy enters black Audi parked in front of the stage door and starts car, lights on, and goes back into the theatre back-stage door.
3. Out comes KC to fan cheers, with said body guard and another guy carrying her small dog who stands by the car in waiting while she proceeds to sign various sized paper and cardstock items.

4. Then off she goes "whisked away in a black Audi sedan."


So there you have it.  An inspiring night at the theatre for me!  On broadway, no less!
Next thing on my list,  buy the soundtrack

So goes the song running through my head and softly warming up my vocal cords during load-in and soundcheck on Wednesday.  Why, you might be asking?

I had this little show I was doing with Hotel California on the huge LAS VEGAS HILTON STAGE FOR GOODNESS SAKE!  (Catch my enthusiasm?)

Yes, it was the very place where Elvis (you know, "Presley"?) appeared in the days of old. 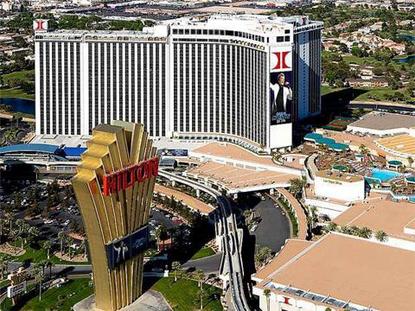 This is where Barry Manilow had his "house gig" as well, before moving to the Paris.

A quick search on YouTube will reveal the vast number of show biz greats that have graced this stage.

Back to the present, below are some moments I captured on my less-than-stellar camera phone in which you can actually distinguish some resemblance of a photograph.  More may be on the way when I have in my possession the pictures taken by Kevin our sound man with his iPhone. 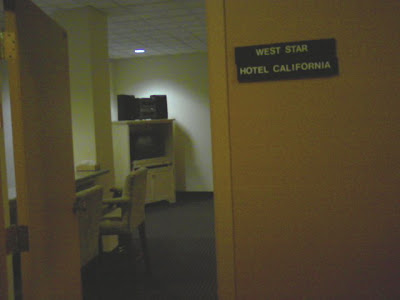